Front Page News: Why We Can All Benefit from Tools to Verify Video

Screen capture of a video still from the article “Brutality of Syrian Rebels Posing Dilemma in West” by C.J. Chivers, as reported on Sept. 5th 2013 on the online version of the New York Times.

On September 5th 2013, debate on a potential American intervention in Syria was in full swing. That morning, a headline reading “Brutality of Syrian Rebels Posing Dilemma in West” was featured on the front page of The New York Times atop a still image from a video featuring seven shirtless men facedown on the ground. Above them, seven men dressed in fatigues and bulletproof vests, pointed automatic rifles down at their captives. The scene was gray, brutal and upsetting. The online version of the article provided the full citizen video, showing the execution of the men and the subsequent disposal of their bodies in a nearby well. The article purported that this event had taken place just months previously in April 2013.

The repercussions of this specific video were felt immediately, with many other mainstream media outlets also picking up the footage. The response was one of disgust, supporting increasingly louder calls to further question the composition and character of many of the Syrian rebel forces. However, in the days to follow, it was found that the video was not taken in April 2013, but in April 2012, indicating that acts of brutality such as this one had been practiced by some opposition factions for quite a while.

While citizen video has become a great tool for reporters to anchor and illustrate stories from inaccessible conflict areas, like Syria, verification mistakes are frequently made due to complicating factors surrounding authentication, such as an untrustworthy source informing on a situation where finding a corroborating source is difficult.

This got us thinking, what if we could choose to have the opt-in possibility for our devices to capture and store more information in our media when we needed to have the media be more reliable? What if we could help media makers make their material more trustworthy? And what if we could aid journalists and other third parties in the sorting and verification process through embedding more information in citizen media and providing them with the ability to set-up secure repositories to receive media from sources?

This is why we, along with our partners at the Guardian Project, have been working on a new tool called InformaCam. InformaCam is a camera app and open source code library that enables a media creator to capture the “who,” “what,” “where,” and “when,” of the video or picture through embedding extensive metadata in their photos and videos, and to structure this in an easily intelligible way. The piece of media is then tagged with a unique fingerprint from your camera, signed with your personal encryption key (a PGP key) and embedded with a digital hash which captures the content and characteristics of the photo or video when it was originally taken. 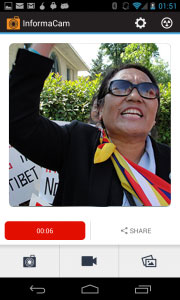 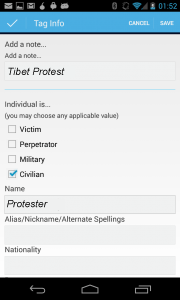 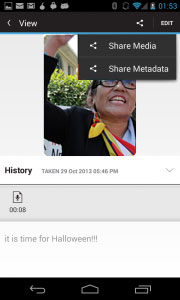 Mockups of InformaCam courtesy of The Guardian Project.

The file can then be securely transmitted as an encrypted file to a trusted recipient such as a news organization, trusted law enforcement, an NGO or an individual. The recipient can then access key information from the image and its surrounding data, such as the time and location when the file was captured. Using this information, the image can also be correlated to other images from the same location or event.

For many witnesses of human rights abuses, this tool could be a great asset. More generally, it is a step in the right direction towards increasing the evidentiary and journalistic value of citizen video. InformaCam empowers the media creator to use their metadata to communicate key details surrounding the contents of their photo or video. For everything from capturing police brutality in Burbank to an extrajudicial killing in Syria like the example from the New York Times piece, InformaCam helps close verification gaps by letting media speak more for itself and allowing documenters to transfer their media securely to trusted sources.

We are excited to announce that we are very close to launching a beta version of InformaCam for testing with initial use groups.  We have had the opportunity to demonstrate the app in a number of contexts, including at the Online News Associations annual conference in October, where key news organizations and industry influencers expressed their excitement over the potential for this technology for international, investigative, and community reporting, and with the Guardian Project are exploring a range of trial projects. Please let us know if you have any additional ideas for uses of this technology and stay tuned for future blog posts and updates coming soon!

2 thoughts on “Front Page News: Why We Can All Benefit from Tools to Verify Video”

Breakthrough Tells Men to #BeThatGuy By WITNESS
A Domestic Abuse Survivor's Story: What It Took to Share and Tips for Advocates and Survivors By WITNESS
Loading Comments...